In Front Of The Screen

When it comes to movies, nothing beats a theater experience, the 30 x 70 foot screen being the prime factor. But going in every week to catch the latest movie wouldn’t be possible as far as the wallet is concerned, and it will be better if I don’t talk about money and deviate from the topic in hand here. So, let’s not talk about it. 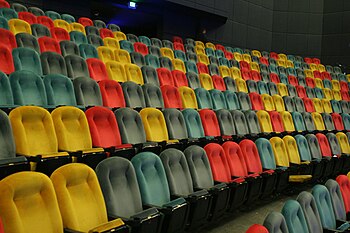 It isn’t very hard to choose a cinema theater. While in Mumbai, you have 4-5 options viz. traditional single screens, multiplexes, IMAX screens, domes and illegal setups. I’m sure you are most interested in the last two, but let’s not talk about them either. Single screens usually go for the best movie of a lot i.e. if 5 movies of different languages are releasing, it will opt for the popular, Hindi language one. Also, since the boom of multiplexes, single screens suck at everything: from hygiene to service to quality to the movie selection itself because nowadays the popular movies are the ones which displease. Not many people go there and the ones which go are not quite in line here. And IMAX playhouses are very less in number & costly & screen only 3D flicks which leaves us to only one option: multiplexes.

Online ticket booking sites have revolutionized the way we plan our movies. No more serpentine queues on Friday mornings except if its a Rajinikanth movie playing, no more lovable awkwardness upon the question, “corner seats?” followed by a wink after you say yes from the seller, no more fear of the H word, no more fear of poor selection of seats, and what-not. I always book my tickets online and I can’t even remember the last time I stood in a queue or if there was a queue for that matter. So, for this year’s Valentine’s Day, I planned a movie with my sweetheart. I could never imagine what I was to set my eyes on few hours later, but that is what this post is about.

Let us call the theater in question as “X.”
Two tickets each worth INR 180, which were quite reasonable on the first day of release. There were two other multiplexes but they either didn’t have a showtime that was suitable or the ticket costs had the capability to insult my wallet. Upon arriving late, all thanks to my sweetheart, we somehow found our seats to the H row in less than a minute. Corner seats, of course.

12 perfect faces of displeasure greeted us as we maneuvered (that’s the right word) our way to what she might have thought to be Valentine’s Day bliss. Thanks to my smartphone’s flashlight, I didn’t miss an expression. I pivoted the corner seat for her to sit and then sat on my chair. Next moment was funnier but I saved it for later. She got squeezed between the seat’s cushions and to support herself she caught my shoulder with one hand and with other, oh son of laughing god, a pack of waste which was dumped by some irresponsible patrons after munching on during the previous show. Terrible! Upon examining her ketchup smeared hand, I got a fair idea of what the theater canteen’s menu consisted of.

We walked out to the restroom. The 12 faces’ displeasure meter ticked at low, because now a song was playing and it was an antonym to the word music. The movie was at approximately at its 30th minute. We came back and opted to sit on the front than going back for 2 reasons: she was uncomfortable and I didn’t want another sight of those 12 examples of wrath.

The first half was almost ruined but we didn’t miss much ’cause of the songs. We held hands in the second half and after thorough analysis with the help of my nose, I understood that the ketchup she had her hands covered in was not of a specific brand. There was this pungent smell coming out of somewhere and that interfered in my analysis. My sweetheart had first sensed it since her little juicy incident in the back row. As an adult, I could guess what the odour was of. It was of the spermatozoa.

I was under an impression that only those back seats were famous for kinky sexual escapades. Even I have stolen few kisses out there, but this thought itself was repugnant. As my sweetheart here somehow got engrossed to the movie, I tried to look around because the movie was making no sense. We were in the E row. A gander at what looked like D row revealed a couple snogging expressively. The act kinda aroused me, but what happened next knocked me for six.

I started wondering about the reputation of the cinema theater X. It was a well-established chain brand serving since at least when Dil Chahta Hai came out more than a decade ago. The stench clearly gave away the idea of how cleanliness is not an item on their daily agenda. But, the intensity of the reek told me that it was more than a blob in the seat or few drops on the floor. As sickening it may sound, the following move by the couple left me flabbergasted. What was slightly exciting, now proved to play against it.

The couple were so eloquent and upright-looking that I could easily perceive what came out of the guy’s jacket pocket after she pulled her head out of his groin area in a jerk. In seconds, the latex sheath sachet was torn open and was probably put into use. The view was not that sympathetic but I could see. It was definitely G row of the other side and there were no watchers on that side’s E & F rows. The ushers on both sides of EXIT were engrossed in the movie, just like my partner.

The lady, I believe helped him in putting the condom to use and she stooped back to where she thought was heaven. She started stroking harshly and the guy took his head to control and display the exothermic pleasure. The guy’s left hand moved over her back and to the front, probably to where the actual heaven is. I don’t know if an Aladin’s lamp was at play, but for an aggressive stroking like that, his organ should be chafed red. Few more strokes and she retreated slowly. She, still all horny, insisted on kissing while the guy used his right hand to remove the sheath. The love (or lust) which was ample while the thing was worn diminished to zero while it was removed, as is globally common. But what was not common is how he discarded it. He bent down and tossed the heavier condom under his front seat, simultaneously playing a 20% part in smooching act. He then forced his girl to bend again, but she shook her head like girls do when they are mad in love and you ask for a break-up. He buckled up as she set her brassiere and they started whispering which was evident from their nuanced body language.

Minutes later, the hall lighted up and I saw their faces. I don’t wait for the credits to roll, much like 80% of moviegoers and we were the first one to walk down to the exit. My girl babbled as we walked, but I wanted to turn and have a better look which I did. Both in their twenties, dressed suave and svelte, with goggle hanging over her cleft, walking hand in hand. They looked like decent lad and lass yet their behavior so disgusting. I don’t pray much but if God ever decides to have a word with me, I’ll be ready with a pencil and a sketch-board. I have invested a spare part of my memory for those miscreant bastards.

Now we know the origin of the repulsive stench and latex answers the intensity. How theaters don’t clean after each show is another story; nowadays shows are screened with only minutes between them. Funny how often like this, it is the show in front of the screen that is unforgettable.

PS: H stands for HOUSEFUL; The movie was Gunday.

[…] platonic but silent and non-disruptive canoodling to heighten the movie-watching experience. Those involved in sexual acts will be warned but not banned because I understand and can confirm that sexual urge (i.e. the urge […]