It’s finally that time of the year. When I look for cheeky excuses so that I can take a few days off from work to experience cinema the way it should be. Without kids, without anti-smoking disclaimers, and without censorship. It is when I put everything else on low priority and make love with cinema. Yes, it is the 20th Jio MAMI Mumbai Film Festival starting from this Friday, 25 October 2018.

And I’m all too excited.

The 2018 line-up is one of the best in a long time despite not having Bradley Cooper’s A Star is Born. / © MAMI

Rewind to the Previous Editions

2015 was when I first attended the MAMI film festival and it was a dream come true. Dear friend Rohith Ravindranath of The Review Monk reached out to me and asked if I could cover the festival for their Bollywood film review aggregation website.

I had no experience in anything remotely close to what was expected of me but I said yes. The day I received my festival bag was when I fell in love with the festival. (People who know me also know how fascinated I am by merchandise and stationery.) I honestly didn’t do a great job then (even jinxing an interview with filmmaker Ruchika Oberoi who had a premiere of her debut feature, anthology drama, Island City that year), but I did produce a few articles that I am still proud of. For instance, here’s my take on Satyajit Ray’s “The Apu Trilogy”, a restored version of which I got to see that year. All three films on the big screen! Yup! 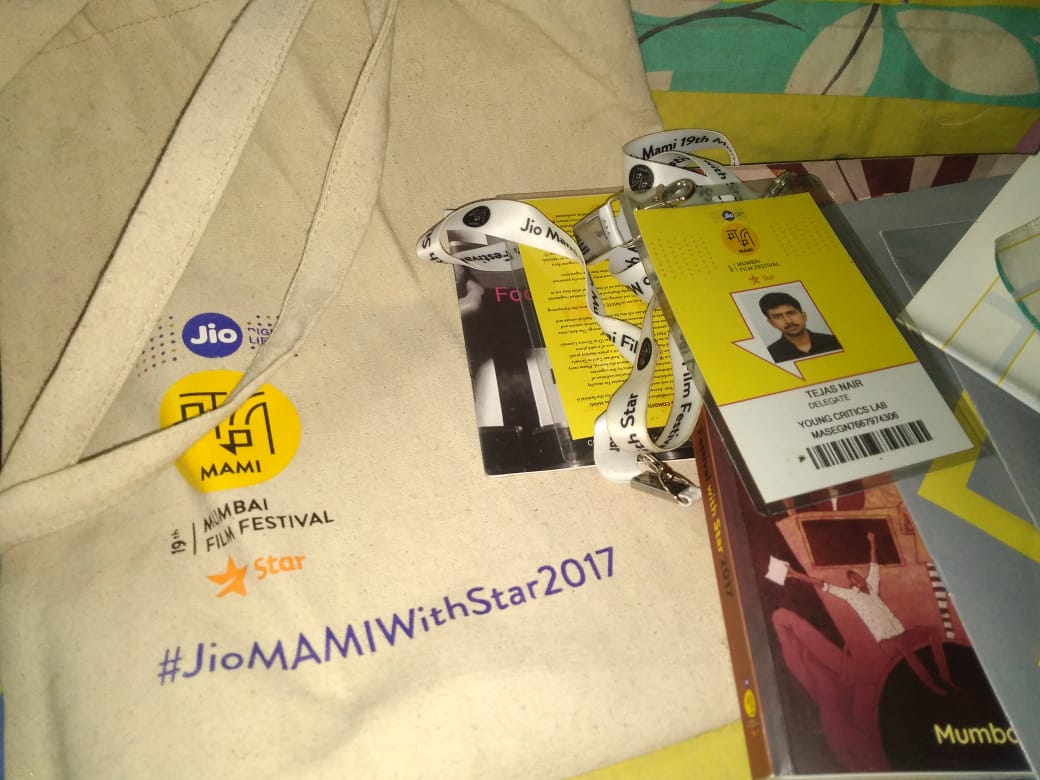 My bag and other stuff from the 2017 edition.

But, 2017 was a great year because I got to attend the Young Critics Lab, one of the most exciting experiences in my life. I learned a lot about film criticism and writing, and on the way, caught Indian premieres of some great indie films like Sanal Kumar Sasidharan’s Sexy Durga and Devashish Makhija’s Ajji. 2017 was also the year I interacted with people who are honestly passionate about cinema.

And I am hoping the same happens this year as I count down to Friday.

Although the official dates of the festival this year are 25 October 2018 to 1 November 2018, the actual film screenings do not start until the 26th. Which means you still have two days to register. Don’t think twice!

According to the Academy, more than 200 films will be screened at the venues across Mumbai. I have a few favorites and must-watch films that I will talk about later. But, for now, let’s see why the Jio MAMI film festival is better in its 20th anniversary. Here’s a sneak peek:

The ticket price this year is just INR 500 (around $7) and if you are a student you can go in for free. There are a few terms associated with that free student pass, though, so make sure you read them carefully at BookMyShow or the official MAMI site. Looks like the Academy is doing everything it can to attract the crowd, which honestly it does not need. The number of people who flocked Regal Cinema in 2017 to watch Anurag Kashyap’s Mukkabaaz was astronomical. I even heard that people were sitting on the floor to catch the opening film; the craze eventually transferred to the rest of the festival as well.

Also check out the beautiful and content-rich catalogue for the 2018 edition here. Even if you miss the festival, a good read of this will give you enough cinematic fodder to appreciate the art.

Films to Watch Out

The opening film is India’s highly entertaining answer to Deadpool, Vasan Bala’s Hindi-language superhero film, Mard Ko Dard Nahi Hota (The Man Who Feels No Pain), which a lot of people seem to be very excited about. (I am int the moderate level, to be honest.) It will have its premiere at 7.30 PM at PVR ICON in Andheri on the 26th. And I hope to catch it.

There are a massive 64 films in the World Cinema section of the festival, and I think it is the biggest haul we have ever seen. Many of these 64 are regarded as must-watch films at the 2018 edition. But, still, I have made my own list based on the hype, reviews from other film festivals around the world, and pure cinematic artistry.

A list of all the screenings can be found here. The entire personal list of 50 must-watch films can be found at my IMDb profile here. Out of these 50, the following 10 are already available on VOD. So, I think it will be wise to focus on the ones that are not. Some others like Spike Lee’s BlacKkKlansman and Paul Dano’s Wildlife will be out in the next few weeks.

I might still try to catch Josephine Decker’s Madeline’s Madeline and Debra Granik’s Leave No Trace on the big screen because they really are of my type.

Top 10 Must-Watch Films at the Festival

The following 10 are based on personal tastes and expectations. So, there is a high chance you may not agree with it, especially because I have given Jean-Luc Godard’s The Image Book the snub.

I don’t know if I will be able to catch all of these because getting tickets is a real struggle. You are supposed to get up before 8 AM the previous day and book for shows you are interested in. 9 out of 10 times, either the BookMyShow site crashes, or my internet speed turns slow, or the show itself is sold out before I can blink an eye. (Which makes me wonder what do other film festivals around the world do if they are not busy.)

I will be collecting my badge on Wednesday, 24 October 2018. After which I intend to follow a schedule that works for me. Here is a snapshot of how I plan to experience the MAMI Mumbai Film Festival in 2018. Pardon the atrocious handwriting and brevity.

You may view or download the full schedule here.

A bird’s eye view of my plan. Comments on the handwriting will not be entertained. (Click to enlarge on a new tab.)

The axes are time and date. I plan to cover the entire festival on October 28, October 31, and November 1. Rest of the days, work comes between me and cinema. Which will actually pay for the commute. Because getting from one venue to another (if you are not in Andheri) can be really tedious. It’s the Mumbai film festival, not the DIFF.

Based on this schedule, I will be mostly hanging at PVR ICON and PVR ECX in Andheri. If you wanna say hello or maybe even catch a film together, email me.

The first day will be only for Mard Ko Dard Nahi Hota. The second day will be more fun with Light in the Room and Jonaki at PVR ECX. Or else, a three-movie marathon at Regal Cinema, Colaba.

The third day – Sunday – will be exciting. I wish to catch The Heiresses, Roma (or Udalaazham), Bhonsle (or Ash is Purest White or House of My Fathers or Wildlife), and Shoplifters (or The Day I Lost My Shadow).

Forth day will be again dedicated for either Rajma Chawal (or Light in the Room (if I miss it the first time) or Too Late to Die Young). Same goes for the fifth day when I hopefully will catch Border at PVR Mulund, followed by Climax at PVR Juhu.

The last two days look exciting as well, which I will hopefully end with Steve McQueen’s Widows.

I will be completely skipping the discussions, interviews, and short films this year because I want to focus only on feature films. The talk with Sean Baker and Darren Aronofsky look good, so there’s a chance that if I don’t get a seat for the films I might take a look here.

Note: The New Medium III i.e. multi-screen cinema, where content will be projected on three screens at the same time looks interesting. If you are interested, do check out the schedule.

Heading to the Festival

I will try to post daily updates here but I am not sure how feasible that will be with all the traveling and work stuff taking up my time. If you are interested, there’s an active thread up on Reddit that I started to see what other film enthusiasts have to say about the festival. Alternatively, follow r/bollywood there to get more updates.

I am quite excited this year because things are going as per plan so far this time. If I am able to catch even a dozen films, I will be content. And preparing for a better 2019…

[…] fest in terms of footfalls and audience response was much weaker than what it was in 2015 and later in 2018, one of my most successful years as far as MFF and me are […]

[…] (of around 12 days) for the final month. Because you also have to mandatorily attend the festival (a glimpse here of the 2018 edition) and review all the films in a certain section (in 2017, it was India Gold) to […]

[…] also check out what titles are available on VOD or for streaming online and then skip them (something I did in 2018). The idea is to watch as many rare films that won’t be easily available in […]