Day 1 of MAMI film festival started with going to work but ended with an easy, evening show of Vasan Bala’s Mard Ko Dard Nahi Hota at Andheri’s PVR ICON. It was the opening film and its first show, so naturally, the multiplex verandas were overcrowded.

I enjoyed the film very much but I could sense a mixed response from the crowd. You can read my capsule review here.

Now that the most common question is answered, let’s move on to some other tidbits surrounding events that made up the first day of the festival this year.

Traffic between the venue (Infiniti mall) and Andheri station is slow, but I reached a lot earlier than I had thought. Although I reached one hour before the show, the area in front of auditoriums 2, 3, and 4 were ridiculously crowded with poorly managed queues and random people asking you to excuse them every second minute. It was easy to spot the queue I was supposed to be in because it was the longest and the loudest.

Much to my disappointment, I got to sit in the fifth row from the screen. Since at least half a dozen of the back rows were reserved for the better and more important people, loyalists like us were ushered to the front side. Many people complained but gave in because we always do.

There even was a brawl some fifteen minutes before the start of the show. A group of cinephiles started shouting, clearly noticing the discrimination, which led to a group of MAMI organizers shouting back. We were in for entertainment at the fest even before the opening film’s credits roll began. How exciting is that! 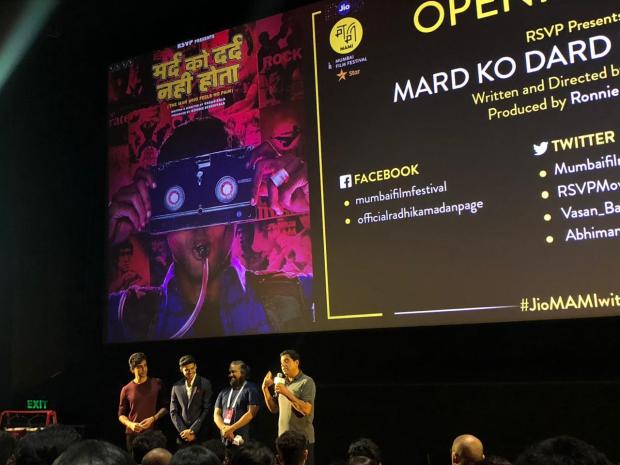 (L-R) Gulshan Devaiah, Abhimannyu Dassani, Vasan Bala, and Ronnie Screwvala during the introduction of their film.

Mard Ko Dard Nahi Hota was introduced by Ronnie Screwvala (producer) followed by the director himself, in the presence of lead actors, Abhimannyu Dassani and Gulshan Devaiah. Saw a bit of a sexist remark there when they talked about Radhika Madan’s absence. Very much in contrast to a whiteboard placed outside the auditorium that had the title – #MeToo @ MAMI – on it. :/ The film began minutes later to a thunderous welcome from a full house.

Since I was coming in directly from work, I had thought of grabbing some energy bars during the intermission. Only to realize later that one of the pros of being a film festival usual is that you get to see movies like they should be seen – the entire length in one go and without intermissions. (Watching Bollywood movies in Indian theaters does that to you.)

On the other hand, the downside is that you have to attend and stand for the national anthem. Any thought of skipping it, like I often try to do, will mean that you forfeit your booked seat.

The Q&A After the Opening Film

The other upshot of film festivals is that you also get to meet and interact with the main cast and crew of most of the films you watch. As I mentioned above, the top guns of the film were present at the screening with Miss Madan joining us soon afterwards.

After some interesting questions from film critic Baradwaj Rangan, the mic turned to the audience and I was slightly blown away by the type of questions some people asked. From the usual questions to ones about the screen size and colour grading, it was like a cherry on top of the entire event. There are still some things about cinema I am learning right now after having attended the Young Critics Lab last year. Devaiah’s antics were in full show at the session even as director Bala tried to answer the questions diligently. 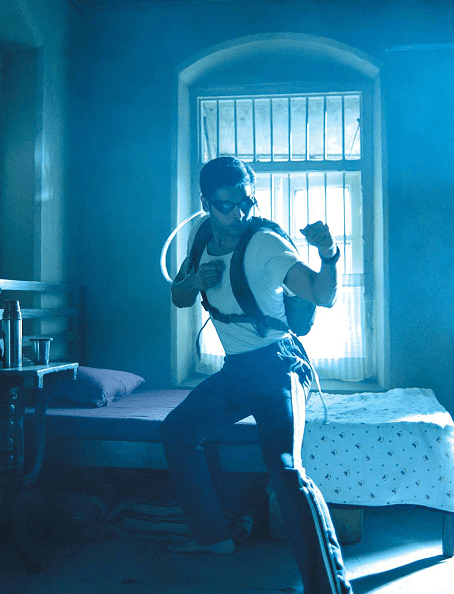 It was not surprising to see that even Bala mentioned something that implied piracy of his own film (his debut venture, Peddlers (2012)) when someone asked how they could get their hands on it now that they were impressed by Mard Ko Dard Nahi Hota. (Last year the festival, American director Ava DuVernay also made a similar remark about piracy.) It was clever of Bala to make that remark, but an even cleverer one was pulled by Screwvala, who at the end of the session, politely asked the hall to give a short standing ovation to the crew. Looks like the Indian audience is not as warm or receiving as the West, he quipped.

If you are going to be in Andheri this week and will get a rickshaw, make sure you fire up Google Maps and see that the driver is not fleecing you. Enjoy the rest of the festival and keep in touch here at nair tejas dot com. Find out the day 0 stuff here.

I had planned to watch two films on day 2 – Rahul Riji Nair’s Light in the Room (Malayalam) and Aditya Sengupta’s Jonaki (Bengali) – but BookMyShow told me I could only watch one. Here’s to a better second day at MAMI 2018. TN. 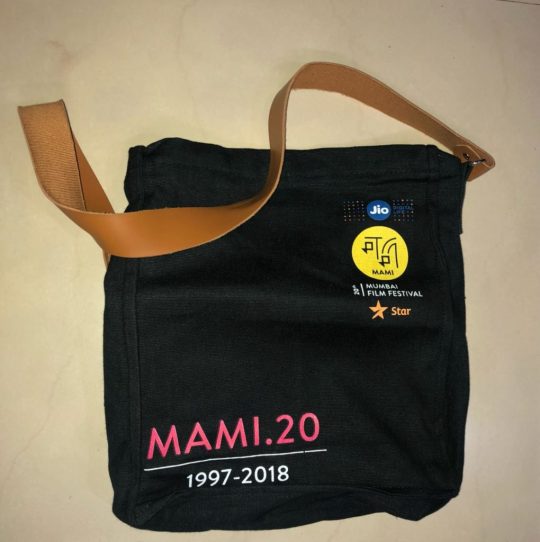 Finally picked up my MAMI bag. A souvenir to cherish. 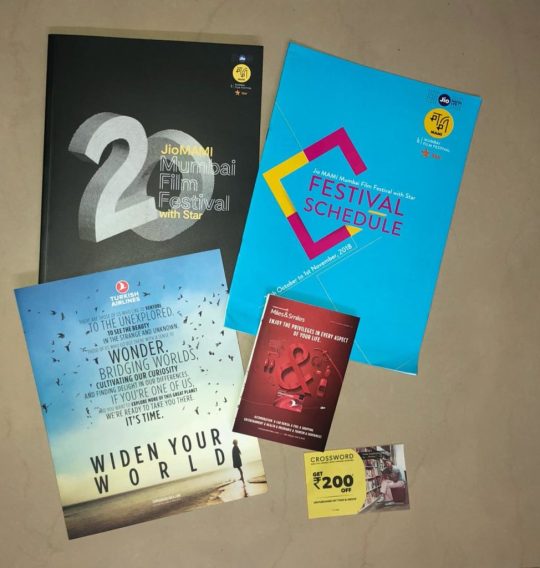 The MAMI 2018 catalogue has some great write-ups and descriptions.