Describing the Four Newspaper Kiosks that I Patronize 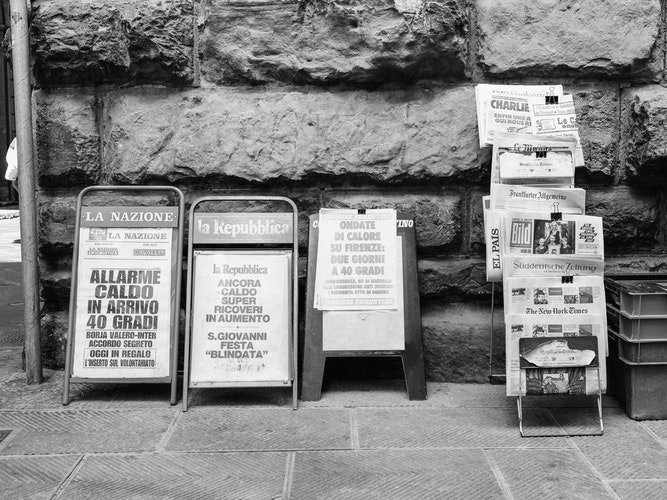 There are four different kiosks located in different parts of the township that I live in that I frequent to buy newspapers. Because I found out that the agency that used to deliver to my home was ripping me off, I began buying it myself and, that too, without paying extra for “delivery”. Now it has become part of my routine. So much that I cannot resist talking about it here.

Here are short descriptions of the four newspaper kiosks that I have been frequenting at least since late 2017.

My favourite place to buy newspapers from, this kiosk is run by a wife and a husband who look like they are in their late 40s. Situated in a corner of the busiest intersection in the town – encroaching a footpath – adjacent to maybe the second busiest bus stand, it only consists of a table the size of two umbrellas if they were forcibly shaped into a square, a huge umbrella twice the size of the ones I just talked about and which is the standard size for all such kiosks, be it the one that sells Jio SIM cards or SBI credit cards that you don’t want, and one or two plastic chairs. Sometimes they tend the shop together, often talking between themselves and laughing, attending all their customers with a wide smile. Buying my favourite newspaper from them is usually how I start my weekday and exchanging a smile with them sometimes makes my day better. Although, the decrepit waste bins right in front of the kiosk turns me off.

This is the most recent find of mine and also a lifesaver because it is the only newspaper kiosk that stays open till one in the afternoon. Set up on a few boxes as tall as a five-foot person’s knees with a single plastic, support-less chair, it is run by an old man who is at least 60. His wisdom that the shop is located in the township’s busiest market which I think works better for him than for the couple above, even if both act as enroachments. I like to believe his sales are better because copies of The Times of India (TOI) often gets sold out here, which forces me to buy Hindustan Times. (Does that say something about these newspapers?) Located just beside an auto-rickshaw stand, when the old man is not selling newspapers, he has people to give him company (at least when they are not on the roads). And let’s not forget about the umbrella; only here it is adjusted to a lower height that makes me bend and swerve to pick up my copy.

This is run by multiple people and I don’t know if they are all related by blood. I know for sure that the guy who tends the shop these days is an employee because he’s least bothered, always stuck to his mobile phone playing what looks like PUBG. It is the kiosk with the biggest display (enroaching about 80% of the walkway) and at a height similar to that of the old man, which works against them because they have the same umbrella. During monsoon and because they keep TOI on the corner, I often have to do with a damp copy (despite pulling the one in the middle of the stack). They are situated next to probably the third busiest bus stop and in front of a popular cake shop whose quality of cakes has gone down as fast and terribly as the level of arrogance has gone up in the owners of this kiosk. They often refuse to sell me a paper if they have already bundled the copies together and are about to leave. They say they stay open till noon but I have never seen them go beyond 11.30 and that is what makes it the most less-frequented kiosks of all for me. The paper is right there and which can be even removed without unbundling the bundle and yet I have gone back home empty-handed, haven’t I?

This kiosk, located at the entrance of the town’s not-so-busy railway station, looks like it is not the primary business of its owners. The one 20-something chap who tends the store did not even know the cost of TOI the first time I bought it from him. It may be true that he was new then but I still see him check the rate before giving me the balance to the 10-rupee coin that I hand him. Located in the walking area of the station as an enroachment, it has a medium-sized display (like half of that of kiosk #3), a small plastic chair, and a separate section where the guy keeps a huge water bottle. I don’t usually see many people buying from him because everyone is trying to catch their train that’s already on the platform. But the guy is not much bothered either because he is probably in a game of PUBG locking horns with the under-performing employee of kiosk #3.

These are where I spend two minutes of my life every day not just buying newspapers but assessing and judging people who sell them to me without ever knowing that I have written short descriptions about them and criticized them for enroaching public space on a medium that is trying to kill their business. TN.