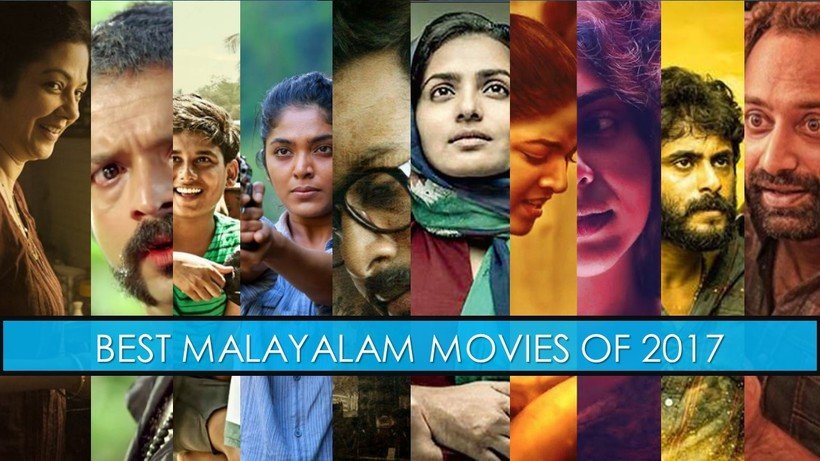 The first few months of a new year is always a great time to consider, watch, and evaluate the best of cinema. While you get your life back on track, relax by binge-watching the best films that people enjoyed in 2017. These are the top Malayalam movies of 2017.

Although the international awards season is behind us, it’s wise for Malayali film fanatics like you and me to review the best titles that graced the theaters back in our land in the past year. So that when the topic of cinema comes in, you don’t sit like you don’t know who Tovino Thomas is.

Without further ado, here are the 10 best Malayalam movies that both audience and critics enjoyed in 2017. In a countdown list mode to make it look more dramatic.

Out of a list of the 132 odd Malayalam films that released in the calendar year 2017, a measly 25 titles were deemed “watchable” by the cinema-going public and critics. I have listed only the top 10 based on critic ratings and reviews and without considering the inflated box office numbers that production houses circulate on social media.

These are the 10 top Malayalam movies of 2017, according to critics and my personal ratings.

One of the best horror films to come out of Malayalam cinema is also one of the most well-received titles of the year. Ezra, directed by debutante Jay K, was 2017’s first release of Prithviraj Sukumaran who was gasping for a success since Ennu Ninte Moideen (2015).

Sukumaran plays a troubled nuclear energy specialist who is convinced that his wife, played by the charming Priya Anand, is possessed by an evil spirit. It not only involves the interesting concept of “Dybbuk box” but also has a powerful score that is eerie enough to scare you. Sukumaran acts in his trademark style (something he continued to do in Adam Joan later in 2017) and leads the film written with sufficient amounts of horror and thrills to be called a hit Malayalam movie of 2017.

Ezra is shot beautifully and the crew deserves applause for carving the almost perfect horror film, a genre that is hardly ever visited by Malayalam filmmakers.

Don’t forget to check out the chart-topping songs from the film – “Lailakame” and the surreal “Thambiran” produced by Rahul Raj and Sushin Shyam respectively.

Ezra is available on DVD.

Not many people know that Dr. Biju is a director who uses his films to shed limelight on stark social issues. Neither do people know that the Malayalam parallel cinema, also known as the indie film movement, is still strong as before. And Kaadu Pookkunna Neram is one such example that made those who watched it go ga-ga.

While India sent Amit Masurkar’s mediocre drama about Naxalism, “Newton”, to the Oscars (which consequently lost the race obviously), the fabulous Kaadu Pookkunna Neram spiraled into oblivion. Because it did not run for more than a few weeks and because the makers failed to promote it in a better way; it did not even come under the radar of writers who make lists like this.

Starring Rima Kallingal and Indrajith Sukumaran – two of the most underrated actors in Malayalam cinema – the film talks about a policeman’s journey into the woods in search and for possible apprehension of a Naxalite group. A very simple and straightforward film, it reeks of minimalism and must be seen to understand how the nasty movement actually affects people in the interiors of Kerala.

And while you are here, let me also convince you to check out Sanal Kumar Sasidharan’s controversial and therefore multiple award-winning feature film, Sexy Durga, which opened on 23 March 2018.

Kaadu Pookkunna Neram is not available on DVD/VOD.

Director Basil Joseph’s second directorial venture after the comical Kunjiramayanam (2015) was by some looked at as a powerful ode to feminism. While that may or may not be true, Godha is surely as good as Malayalam entertainment can get. Starring the lovely Wamiqa Gabbi, Tovino Thomas (now you know who), and Renji Panicker, it told the story of an aspiring wrestler who finds her way from Punjab into Kerala to realize her dreams.

A quick uplifting watch, Godha takes you to a fictitious village known for wrestling and home-grown wrestlers and tries to break down few stereotypes on the way. With some great performances by the stars and occasional shoots of comedy, it was one of the best-reviewed films of 2017. Check out Shaan Rahman’s wonderful melodies in “Aaro Nenjil” sung by Gowry Lekshmi.

It is one of those rare films that both did well at the box office and made the job of critics a tad difficult. But there were still who compared it with Nitesh Tiwari’s Dangal and Ali Abbas Zafar’s Sultan.

Godha is available on DVD.

Called the funniest Malayalam film of 2017, Midhun Manuel Thomas’s second outing of the year after the abysmal Alamara provides more than what it promised. It takes you back to Shaji Pappan and his motley crew of half-witted nobodies as they get embroiled in a conspiracy that they can’t make head or tail of. Destroying the myth that a sequel can never be as good as the first film, Aadu 2 emerged as one of the best Christmas releases in Kerala and was also certified a box office hit.

Sitting like a crown on Jayasurya’s filmography, who enjoyed an almost equal success with Punyalan Private Limited (another sequel film) earlier in 2017, Aadu 2 shows that humor does not always have to be mixed with crass. A combination of slapstick and situational comedy – that is Aadu 2 for you by a talented crew headed by Vijay Babu.

One of my personal favorites, Parava was highly anticipated mostly because it would mark the directorial debut of the phenomenal Soubin Shahir, known for his perfect comic timing and situational jesting. A man with great number of talents, Shahir took crafty filmmaking to another level with Parava, which talks about pigeon flying, a racing game (and a maddening hobby for some) popular in Mattancherry and Fort Kochi areas of Kerala.

Starring newbies in crucial roles and Dulquer Salmaan and Shane Nigam in supporting ones, Parava is a tour de force that must be witnessed in order to be appreciated. In addition to the extra efforts that must have been taken for filming the pigeons and their movements, Parava boasts of mouth-watering shots of the places it is set in, and altogether delivers a power-packed dose of entertainment.

When it came out in September 2017, I hadn’t experienced anything like it in a very long time. Something that I could relate to the experience I had while watching Alphonse Putharen’s Premam in 2015.

Released in the same month as Parava and another film by a debutante director, Njandukalude Naatil Oridavela is a dark comedy that so effortlessly conveys its message about a serious topic that you will stare in awe even as the credits roll. Consisting an ensemble cast of Nivin Pauly, Shanthi Krishna, Lal, and Aishwarya Lekshmi, it is a delightful piece of life that must be viewed with your family.

Don’t miss the somewhat useless (in the film) yet hummable “Enthavo” sung by Sooraj Santhosh and produced by Justin Varghese.

Though not a personal favorite, Thondimuthalum Driksakshiyum is considered one of the best Indian movies of 2017. With realism as his main weapon, director Dileesh Pothan embarks on a journey with two of his most raw characters who meet the third one to wreak havoc in the most natural way.

Working around a gold chain that goes missing, the film aspires to shed light on how the society works, meanwhile also poking fun at police apathy and their piglike attitude. Suraj Venjaramoodu reclaims his stance as an actor who can play any role, and so does Fahadh Faasil, who upset few fans because he is not the main protagonist in the film.

Nimisha Sajayan can easily be called the breakout star of 2017 as she geared up and flourished in her new release, “Eeda”, early in January 2018.

Thondimuthalum Driksakshiyum is available on DVD and BluRay.

If Aadu 2 rose as the box office hit of the Christmas season, Aashiq Abu’s effervescent romantic drama Mayaanadhi ruled the critic circles. Starring Tovino Thomas (wow, again!) and the resplendent Aishwarya Lekshmi (wow, again!) as lovers, it is being called a love story that talks about “being in love”. Not the superficial courting or the gooey aftermath – just plain romance that is so much missing from this world.

Written by the talented duo Syam Pushkaran and Dileesh Nair, Mayaanadhi is easily one of the subtlest Malayalam movies of 2017. It’s devoid of gaudiness and that’s why it works.

A festival favorite and more popular as the Malayalam film hailed by Anurag Kashyap, Lijo Jose Pallissery’s Angamaly Diaries is the rawest Malayalam film of 2017. A brief look at the trailer is enough for you to get hungry for the whole film.

Known for its gritty storyline about street gang wars in the Kerala town of Angamaly and starring mostly new actors, it received international acclaim for a variety of things including the minutes-long single take climax. If Nimisha Sajayan was THE breakout star, I think we can at least name Antony Varghese as the breakout male star of Malayalam cinema of 2017. He will be next seen in Swathanthryam Ardharathriyil (2018).

Don’t forget to listen to its weird soundtrack, notably “Theeyame”, “Thana Dhina”, and the love number “Do Naina”.

(Having said all that, I’m still curious about Pallissery’s Ee.Ma.Yau, which got a preview screening sometime in November and then disappeared.)

Angamaly Diaries is available on VCD and VOD.

A theme recently sampled by Ali Abbas Zaffar in Tiger Zinda Hai (2017), Take Off took me by surprise. Director Mahesh Narayanan delivers a breath-taking view into the ruins created by ISIL-controlled states as he chronicles the lives of a few nurses who find themselves held captive by the unforgiving terrorist outfit in Syria.

Parvathy won accolades for her mature performance as the leader of the nurse gang as she both tries to contact her husband, played by Kunchacko Boban, and awaits help from her Indian embassy chief, played by Fahadh Faasil. Narayanan has left no stone unturned with Take Off as you dissolve into the stupendous performances of the lead stars who act like they are living the characters. It completes the top Malayalam movies of 2017.

Take Off is available on DVD.

Malayalam Cinema in 2017: Year in Review

It is often very difficult to create such lists containing the best cinema has to offer but for 2017 it was very easy. More than 60% of the films that released last year were turkeys, some of which were huge disappointments such as Ajai Vasudev’s Masterpiece and Bejoy Nambiar’s Solo. However, there were titles that deserved much more love from their audience. And few such honorable titles are listed below.

But, I am happy to close the year with the fact that 2017 saw films that had women in prominent roles and almost half of the above 10 films had lead actresses, Godha and Take Off to name just two. Now let’s move ahead with more roles for women in the production side too. We start with Roshni Dinaker’s My Story coming up in early 2018.

For a detailed analysis of these films and to know how I came up with this list, check out my blog piece.

Here’s to a new year filled with better Malayalam films.