It is on day 2 of the 2018 MAMI festival that I realized that if I watch at least one movie per day, I will be standing a record seven times for the national anthem in a single week. If I consider this fact the way the government thinks forced patriotism works then I will be a pukka patriot by day 7 or maybe even before that. Interesting, isn’t it?

After some issues with the booking on day 0 and a good day 1 at the fest with the golden chance of watching the opening film, I took it a notch up and caught two films on day 2. I was at Andheri’s PVR ICON the whole day and had to miss Aditya Sengupta’s Jonaki because BookMyShow did not want me to embrace old-age nudity. Friends tell me that I am lucky I missed it because it was a snoozefest. Can anyone else corroborate that?

The day started with Rahul Riji Nair’s terrific Malayalam-language drama, Ottamuri Velicham, followed by an interesting Q&A session with the director himself. I liked the film very much and also reviewed it later on IMDb. But it upsets me to know that it will not have a theatrical release in India as the makers rightly believe that there may not be enough viewers interested in the topic of marital rape and it might then become difficult to cover even the distribution costs. (They are planning a digital release, though.) Such is the story of most India Gold films featured at the festival over the past decade. Ruchika Oberoi’s Island City (2016) and Konkona Sen Sharma’s A Death in the Gunj (2017) are just two examples.

Which is also why I am glad to have caught it at MAMI. For a film about marital rape, there is no nudity or vulgarity, but the makers still had a problem certifying it. Reason: The CBFC and the Animal Welfare Board of India had issues with the picturisation of animals (wild boars and a hen) in the film. Animals! Which has to be the most ridiculous thing I heard on day 2 at MAMI. Perhaps the most ridiculous thing of all time in the history of cinema. 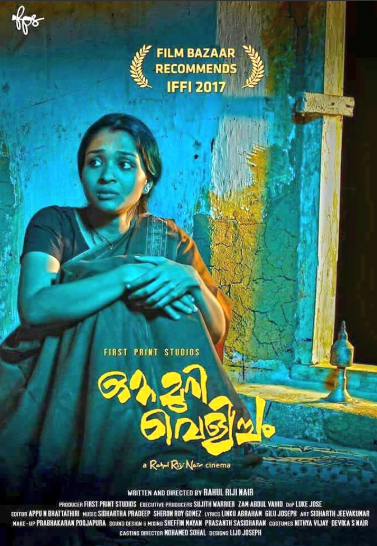 The Q&A Session of Ottamuri Velicham

Another fascinating point about this screening was that it was shown along with the tobacco warnings (the poorly-produced Rahul “The Wall” Dravid advertisement). I was a bit miffed because that is the second thing that annoys me about watching films in theaters in India. (The other is this.) But then the session moderator clarified why. She said that the festival is not allowed to show the uncensored version once the film has been censored. And it was, last year itself when it also won the Kerala State Film Award for Best Film.

Director Nair spoke at length about the struggles of making his debut and also shared stories about it, which took up most of my time before I rushed to the next screening.

If there is one type of film that I am not interested in then it’s animation. And yet I found my way into the PVR auditorium that played Milorad Krstic’s Ruben Brandt, Collector, a Hungarian English-language animated comedy-drama. I was honestly impressed by the film, which is an exercise in paying attention to details. Review here.

The disadvantage of being in the standby line and having to sit on a seat in the first row is that by the end of the show you lose all energy and neck power to continue with the fest. I headed home by Mumbai Metro and enjoyed myself a nice buffet dinner with friends.

It is wise to carry a water bottle and a few energy bars with you all the time if you plan to catch at least two movies in a day. You won’t get time to have lunch or dinner (let alone a proper one) so Snickers can be your friend then. Bags are checked before you enter the theaters, so make sure your bag has secret pockets. Or else end up being robbed by the theater’s cafeteria because hunger and cinema don’t go well together.

I have planned four films for day 3, but I don’t think I will be able to catch the morning show. Alfonso Cuaron’s Roma and Devashish Makhija’s Bhonsle are on top of the list (latter, especially because Manoj Bajpayee is gonna be there). Here’s to an even better third day at the lovely Mumbai Film Festival. TN.