The final day of the 20th MAMI festival was the best of the week-long pilgrimage for me. I managed to watch three films – taking the total counter to 13 (a personal record) – one of which was the much-anticipated closing film by Steve McQueen. I was camped up at Regal Cinema, Colaba all day where I found a friend in fellow cinephile Mahesh Bariya and ended the fest with a lavish dinner at the historic Leopold Cafe.

Here’s a rundown of the three films and some experiences of day 7 of the 2018 edition.

I was supposed to catch Desiree Akhavan’s The Miseducation of Cameron Post at Regal in the morning but thanks to my sleep cycle, I missed it. So, I planned my train travel for the 2 PM show of Gaspar Noe’s Climax.

I had originally planned all my show at PVR Kurla because I had wanted to catch Ivan Ayr’s Soni – people were raving about it – but because they added a special screening of Climax and because I wanted to try my luck for the closing film, I headed to Colaba instead.

Not many people know this but if you don’t get to booking for a show online, you can still book it from the MAMI ticket counter. A screening at Regal can be booked from the counter of PVR at Juhu – and this is what I am going to do in 2019. As it is, you cannot totally depend on BookMyShow, and I don’t think I can ever forgive it for making me miss Hirokazu Kore-Eda’s Shoplifters. 🙁

Three Back to Back Films at Regal

The first film on day 7 was Gaspar Noe’s upbeat and full-of-energy French dance thriller, Climax, in which dancers come together to rehearse at an old building only to find that their drinks have been spiked with LSD. It’s an overwhelming experience that might make you try the drug. But, don’t do it. 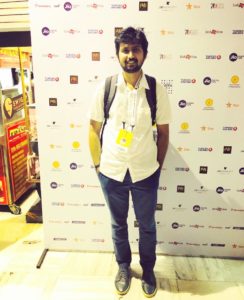 That’s me right after the closing film. At Regal Cinema, Colaba.

Next up was Debra Grenik’s English-language drama Leave No Trace, which was too dull and uneventful for me. Mine seems to be the unpopular opinion, so I think I will just mention that I had some good food from a nearby restaurant before the screening. Which, in turn, made me a bit sleepy during the show. No complaints, though, because next up was the closing film.

It was sort of a mixed feeling to watch Steve McQueen’s Widows because it was the final show of the 2018 edition of MAMI. Although I watch at least one film per day outside of MAMI, it still gave me the feels. Widows is a great thriller and a cool watch if you like heist dramas. My review here.

I even managed to snap a photo in front of the MAMI standee so that I can show it to my grandchildren if that’s possible or if they are ever born.

No National Anthem at Regal

The best thing about watching a film in MAMI at Regal was that they don’t play the national anthem before the screening. You just sit back, relax, and enjoy the movie without any government-infused interruptions, and that makes me happier. I am going to be watching more films at Regal now at every edition of MAMI.

The same thing is followed by Bandra’s Le Reve where I caught The Gentle Indifference of the World on day 6. Without the national anthem. It just feels so good that you don’t have to put up with patriotism when you just want to enjoy cinema in its purest form. I salute MAMI and its partners for that.

Here are some numbers that describe my overall experience at MAMI this year, starting from day o:

It was a hell of an experience this year. I got to catch both the opening and closing films, which in itself makes the 2018 edition the most successful for me. I had a great time and I hope to have a better one next year.