List: All the Films that Opened the Mumbai Film Festival Since 1997 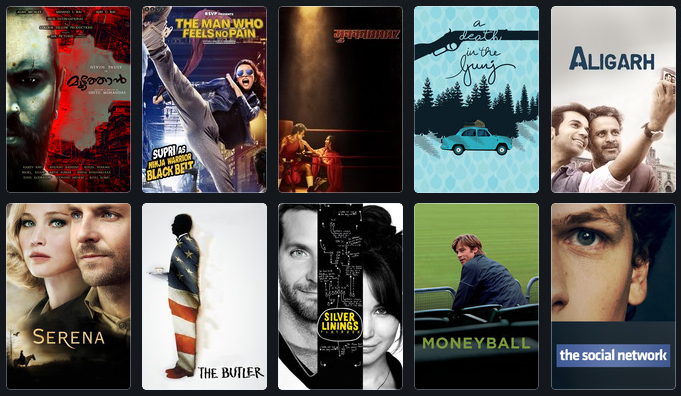 On 29 August 2019 the Mumbai Film Festival tweeted out a few photos celebrating their decision to choose Geethu Mohandas’s gritty crime drama Moothon as the opening film for its 21st edition scheduled between 17 and 24 October. It is the first time that a Malayalam-language film is opening the festival, which has for the last four years consecutively honored Hindi-language features (with the odd one A Death in the Gunj (2016) a mix of Hindi, English, and Bengali) and majorly English-language ones before that. So, naturally as a Malayalam cinema connoisseur it made me jump up in joy. It also made me want to look back at all the opening films of the festival since its inception. This list is a product of that desire and MAMI’s contributions in decorating brilliant cinema since 1997.

From 1997 when Jaya Bachchan’s comeback film Hazar Chaurasi Ki Ma opened the inaugural edition to 2010 when it selected David Fincher’s Academy Award-winning The Social Network to 2019 when a Malayalam film is about to finally get a seat at the high table. This is a list of all the opening films of the Mumbai Film Festival (MFF) in its two-decade-long history.

Listed chronologically along with the name of the director and the primary language of the film. Sourced from a tweet by MAMI (opens in another tab).

Note 1: The festival did not run in 1998 due to a lack of funding by the Maharashtra state government and in 2004 for unknown reasons.[1](MAMI – A Retrospective, The Big Indian Picture, Tanul Thakur and Roshni Nair, October 2013)

Note 2: For your convenience, this list has been duplicated on IMDb and Letterboxd. Updated every year.

A Little Bit of MAMI History

In the inaugural year 1997, MAMI screened a total of 70 films from 25 countries. The Big Indian Picture reports it as 65 films from 23 countries[2](MAMI – A Retrospective, The Big Indian Picture, Tanul Thakur and Roshni Nair, October 2013). Govind Nihalani’s adaptation of the Mahasweta Devi novel opened the festival which was then labelled as India’s first independent film festival. This, considering that Kolkata and Trivandrum already had their own versions, Kolkata International Film Festival (KIFF) and International Film Festival of Kerala (IFFK), respectively. One other major contender for that label was the International Film Festival of India (IFFI). But then MAMI was founded and it kicked off the first edition on 24 November 1997 with much pomp and circumstance. And it naturally ‘assumed’ the title. According to Rupleena Bose writing for MUBI Notebook, it was originally titled as ‘Festival of Films’ when it launched in 1997, which was partly because of a desire to replenish the dull mood of the Mumbai populace after the 1993 bomb blasts.

Either from the people involved in creating the fest or the type of films that were screened (The Fifth Element, Sholay (1975), and Ankur (1974) to name a few), it is safe to assume that many must have thought that it would revolutionize the industry. But more than either of those, it was self-sustenance that pushed MFF to the fore. More than twenty years later and with at least half a dozen more festivals running in India perhaps as a result, I’m inclined to confirm that it is the biggest cinema extravaganza that India currently has in the global landscape.

It is interesting to learn that the opening edition saw about 200 delegates in attendance and Jio’s part was played by Mahindra & Mahindra then which donated INR 5 lakh as sponsorship. The rumour that PepsiCo India showed interest – because of a lack of funds to run the 1998 edition – in sponsoring the fest in 2000 is actually true, but the organizers declined because they did not want it to be named ‘Pepsi Film Festival’. Nonetheless, India Inc. has been historically generous to the festival as past years have seen companies like Indian Oil (IOC), Star TV, Zee Cinema, Sahara, and Godrej contribute for the sake of continuity of the fest. In 1997 if the festival budget was around INR 10 lakhs, in 2013 it was estimated to be about INR 6 crores, thanks to ample funding by Reliance’s Big Entertainment (now ADAG). This type of funding helped MAMI turn from a cash-strapped passion organization into a real harbinger of creativity and vision for cinema on an international scale. In the next decade, it would not only start new competition sections but also run the only film criticism workshop in India – the Young Critics Lab which began in 2009 as a platform for young cinema lovers-cum-writers to hone their skills and take up film criticism as a serious profession.

One key thing to note here is that the organizers did not want the festival to be influenced by the demands of corporate giants, which is why film selection was and has been entirely up to MAMI. This confirms that there is no ulterior motive by certain elements who would want to push a specific film in which they have a vested interest. All the more reason to celebrate the decoration of Indian features as opening films.

What’s in a Festival Opening Film?

A lot, to be honest.

Since 2015 when the opening film was Hansal Mehta’s Manoj Bajpayee-starring biopic Aligarh, MFF has managed to be the starting point of buzz for creative cinema. How else would one explain the almost cult status that the Internet generation has given to Konkona Sen Sharma’s debut feature? Or Vasan Bala’s Mard Ko Dard Nahi Hota (2018) that took Reddit by storm when it released on VOD earlier in 2019? MFF helps native films create buzz, the type that Moothon is currently enjoying as it approaches its worldwide premiere at the Toronto International Film Festival (TIFF) along with other Indian award hopefuls like Lijo Jose Pellissery’s Jallikattu and Shonali Bose’s The Sky is Pink.

But this was not always the case. One of the main reasons why most of the MAMI opening films have been foreign imports is because of the buzz that existed and which they wanted to bring into the country’s mainstream cinema. Moneyball (2011), The Social Network (2010), Crouching Tiger, Hidden Dragon (2000), and The Sixth Sense (1999) have enjoyed heightened status and success in Mumbai and elsewhere in India also because they all were opening films.

In 2018, Vasan Bala’s action comedy opened the festival. And despite the hiccup by its producers due to an issue with distributors and theatre-owners, the film got a theatrical release in 2019. The buzz that MFF created in October 2018 definitely needs to be attributed.

An opening film sets the tone for a festival and in some cases it can also influence the rest of it. In 2017, Anurag Kashyap’s Mukkabaaz got the honour and the response was lukewarm. Although I could not attend the entire week-long event, I can confirm that the overall fest in terms of footfalls and audience response was much weaker than what it was in 2015 and later in 2018, one of my most successful years as far as MFF and me are concerned.

I like statistics so it makes sense to take a look at what numbers tell us about the MAMI opening films. Here you go:

I think selecting Moothon (The Elder One) as the opening film for the festival by an organization that is largely influenced by Bollywood cine artists is a breakthrough. Admitting that cinema is the common language that we speak, MAMI has only transcended beyond what it set out to achieve when two decades ago industry stalwarts like Amol Palekar, Sudhir Nandgaonkar, Kiran Shantaram, Hrishikesh Mukherjee, Shabana Azmi, Shyam Benegal, Gulzar, Ramesh Sippy, and others came together and sowed a seed that now gives us a taste of the best of Indian and world cinema every year. In 2018, the festival was one of the best experiences I had.

It is important to also note that the main intention of MFF was to create a platform for appreciation of regional films. International films already got the attention they desired, but for a secular and multi-lingual country like India where there are films being made in all major languages, MFF was a necessity more than a fad. The selection of a regional film (Moothon is produced by artists majorly from the south Indian state of Kerala) for the 2019 edition is a step towards an extension of fulfillment of that vision.

It is difficult to trace the history of MAMI but this list will probably act as a type of archive as we move ahead and break more barriers. TN.