I Once Got Aroused By a Roadside Mannequin 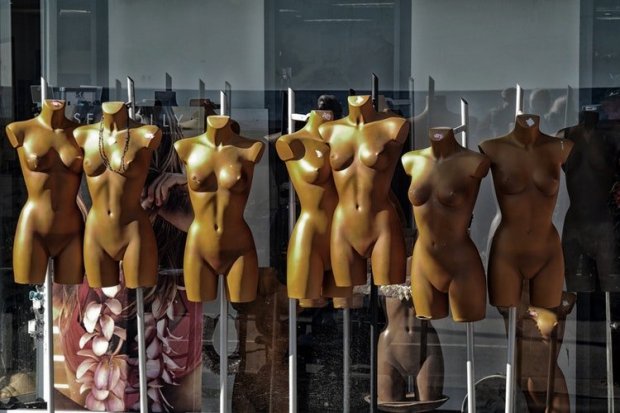 This is Mumbai which has been giving its fellow inhabitants daily updates of gonzo stories (a few more here and here). And this time around, we have a truly bizarre case: Ban the mannequins! They make our men ‘do that’!

“These mannequins are encouraging men to ‘do that’; women aren’t safe,” states a Mumbai corporator defending her request to ban scantily-clad, lingerie-wearing mannequins on roadside shops. Too bad, I cannot imagine how will I ever find another way to get sexually aroused so that I can grope a couple of strangers while being diagnosed with psychosis? Because that sexy mannequin sporting tights outside a showroom of a global clothing brand (with its English title inscribed in Devanagari, mind you) excited the living daylights out of me. Imagine Sacha Baron Cohen’s character in the 2007 mockumentary Borat as he flies to the United States of America in search of capitalism.

But before I, as a singleton, boast about my illogical escapade, we should throw some light into finding out what that ‘do that’ means. It all started in Toronto, where the Slut Walk began, caused by a policeman’s wrong intentions or just wrongly phrased words. It even found its way to India (Delhi) a few years later, but the momentum was low. In this feminist movement, the aim was to pull down patriarchy and defend women’s rights. By the term ‘do that’ the corporator means the four letter word which also means a plant of the cabbage family with bright yellow flowers, especially a variety grown for its oil-rich seed and as stock-feed. She means rape.

Although I still haven’t found the actual reason what makes men to do that, I choose to believe it has something to do with how people in the world are spiralling into paranoia and shooting people, mainly due to loneliness or lack of companionship. The growth of the incel (involuntary celibate) is also attached to this phenomenon, where privileged young men feel like women should be falling for them and then having sex with them. But the uncontrollable urge inside those pants is way beyond my understanding. Is it because they can’t get a girlfriend? Or is it because they are not trying or are creepy in their attempt? There does not seem to be an answer in sight.

But, I can say for sure that scantily clad mannequin (flashing lingerie) is not at all a cause which inspires men to ‘do that’. It doesn’t make an iota of sense for this corporator to ask for the ban of innocent mannequins. It actually obstructs the basic idea. People don’t actually have time to look at the threads a mannequin is wearing let alone analyse its sexual quotient. There can be many other references that could be made on a reverse attack, but I am afraid, the internet doesn’t allow me to, or this may replay that Palghar-Facebook incident. Also, does anyone remember that sex robot named Roxxxy that was introduced in the past decade?

While the real cause is elusive, we can only ask a perpetrator to answer what made him open his fly for an unconsenting and serious crime. History has shown us that these perpetrators are also not uneducated to not understand what they are doing, about to do, or have done. Answers may be cryptic, but I am sure we have people who can decrypt that. Twiterratis over the internet decoding our dear PM’s speechless expressions give me faith.

To conclude, banning mannequins is not even the last thing we can do to fight for women’s rights thusly to affirm their safety. If you cannot come up with an idea, just shut up. I seriously doubt the thinking facility of the people behind the request (the media says a former mayor is involved too), how minutely they have cooked up this topic.

But, the mannequin we have in question here, did really arouse me. It wasn’t the busty female version with cut hands and head, but the male one. And to be more specific, it was not its bod that aroused me, but the clothes it had worn; a white shirt with small red borders and a disastrous denim jean. I entered the showroom and bought the former for a couple of thousands (I am not bragging; clothes are very expensive these days). And now, after reading articles about how there is a daft request to ban the poor fibrous models, I fear some stranger may get aroused by the same clothes which had once aroused me and request to ban me. And literally, a ban on human beings. Now that’s an interesting idea.