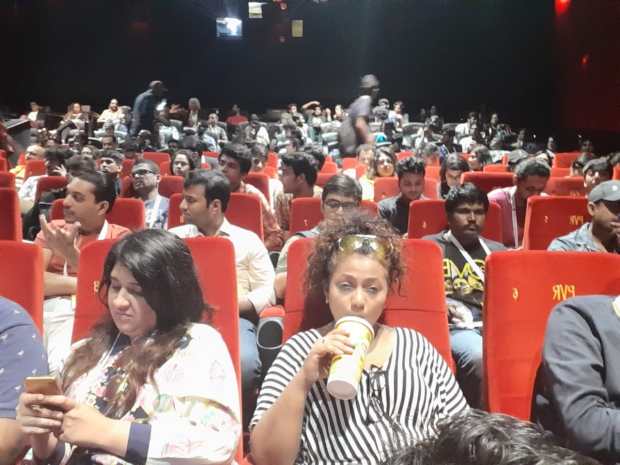 2019 was the best year for me in terms of the MAMI Mumbai Film Festival. I watched a total of 19 films over the six days of the festival which has now given me another treat: I have come down with a bad cold. And I think the culprit is Robert Eggers’s The Lighthouse, the last film I watched, on the day when there was a light drizzle in Mumbai. Slightly soaked hair plus the air-conditioned auditorium of Regal Cinemas in Colaba. What more do you need to catch a cold?

Anyway, without digressing more, here’s five of the best movies I watched at MAMI 2019. In no specific order.

A sweet little tale about love and death garnished with original humour. I was lucky to catch the rare screening of this 2016 Egyptian comedy drama that brought a broad a smile to my face even as I ran out of the hall to catch the next screening, a common occurrence when you talk about MAMI MFF.

This was the comic powerhouse of the 21st edition of MAMI MFF where Jean Dujardin, in a role that was made only for him, plays a man obsessed with a jacket made of 100% deerskin. This French comedy drama cracked me up bad, especially because of its excellent writing and screenplay. Bravo!

Straight out of the meat-loving land of Assam, Aamis (Ravening) is more about the interpretation and subversion of platonic love than gluttony. In it, the lead characters fall in love and execute an outlandish activity to keep their love igniting. It took me by surprise and I am still thinking about it as I write this stub.

A groundbreaking film in the most basic sense of that word, Mahesh Manjrekar’s Panghrun (Cloaking) is a profound period drama that explores woman’s sexuality and her part in a traditional matrimony setup. It is a critique of the traditions. Intensity is high throughout the film and there’s not one element that I disliked about it. 10 stars.

Geethu Mohandas’s crime drama set in Mumbai’s Kamathipura is a wild and true depiction. And it samples so many themes at once I thought I was watching at least three films. Nivin Pauly, Shadhank Arora, and Sobhita Dhulipala are vibrant and unmissable in this gritty yet poignant Malayalam film (translates as The Elder One in English) that numbed me for a few minutes after the final shot.

Choosing five out of 19 is usually difficult but not this time. These five blew me away and I am going to sing their praises for some time now. If I had to expand this list, I would include Wet Season, Aadhaar, You Will Die at 20, Gamak Ghar, and I Lost My Body.

A Dog and His Old Man, Ghost Town Anthology, and Cargo, on the other hand, if I were to create a ‘worst films’ list. I walked out of two films this year: Joanna Hogg’s The Souvenir (boring) and Rob Garver’s What She Said: The Art of Pauline Kael (had to rush for another screening).

This is a great improvement for me since the 2018 edition and I think most of the credit goes to the some planning I did this time. Here’s another year of waiting till MAMI MFF comes back in November 2020. TN.

[…] signifies another element that comes full circle when you complete watching Moothon, one of the best movies I watched at MAMI MFF 2019. Such little bits are also what makes a poster more delightful when you […]

Dang, I missed MAMI Film Festival again. I absolutely loved getting to attend it as part of the ‘Young Critics’ Lab’ back in ’17, and told myself that I’d be paying to attend it every year thereon, but travelling to those two PVRs in Andheri is just too exhausting. I get that they can’t have the festival last a month but I just can’t see how to get the most out of it if I have to travel in the local 2.5 hours either way every day of the festival.

Also, sucks that so many of these amazing movies never end up getting a release. I’ve been keeping track and like half of the ‘India Gold’ movies from ’17 never ended up being released. I think ‘Village Rockstars’ made it, and ‘Zoo’ was on Netflix too, but none of the others. It’s a shame that most of these movies remain inaccessible to the average viewer.

You attended the YCL in 2017? I was there too till the final round.

Also, that travel part is crazy, I know, but it’s totally worth it. The only thing is that you have to give it all those 7 days to indulge completely. No half measures.

About the movies not getting a theatrical release: yep, it’s sad but then I think it also is up to the makers to release it online later. The difficulty in getting a distribution deal is the main cause but if they’re anyway not going to make money, might as well premiere it online for free or otherwise. At least, that is what I think.

This will sound kind of weird but I don’t have anyone else to ask: would it be considered bad form to reapply for the Young Critics Lab if I’ve already attended it once before? I got to attend all 3 weekend sessions and the film fest itself back in ’17, didn’t participate in ’18 or ’19. This time’s the final year I’m eligible for it, though, and I received a mail from MAMI a few days ago about deadlines and submissions. I think I’d love to attend again but not at the expense of taking up one of the limited attendance slots that would be valuable to a 1st-time attendee. Did you ever attend it more than once?

Two reasons why I think you should not reapply: one, like you said someone who hasn’t attended the critics lab may lose a seat, and two, MAMI may not accept you in the 2020 edition if you already participated before.

I attended it only once, same year as yours. If you are still interested, try sending an email to the MAMI YCL folks? They will surely reply. Plus, I’m not sure how this Covid-19 situation is going to play out for the lab. Many off-Mumbai folks may not apply or turn up.

[…] the final month. Because you also have to mandatorily attend the festival (glimpses of the 2018 and 2019 editions) and review all the films in the India Gold section to be eligible to vote for the Best Young […]