Day 3 was the best day I had so far at the MAMI fest 2018. After having caught only one film and two films on day 1 and day 2 respectively, I finally managed to watch three titles. Thank goodness it was a Sunday.

I watched Alfonso Cuaron’s Roma, Devashish Makhija’s Bhonsle, and Unnikrishnan Aavala’s Udalaazham on day 3 and you already know which one is my favorite.

I had to rush to the screening of Roma at PVR ICON in Andheri thanks to the mega block in central line of Mumbai local. The Metro was a helping hand, but I believe the fastest I have run to catch a film all year was for Cuaron’s masterpiece set in monochrome.

But all that running didn’t help much because all the good seats were already taken. I walked down to the second row from the screen – worst so far – and looked forward to spraining my neck later that night. It did sprain a little.

Walking Out from Roma to Udalaazham

Roma – one of the best I watched at MAMI this year – ended at 3 o’clock and I rushed to another auditorium in the same theater. Udalaazham had already started at 2.30, so I missed the opening. But by the end, I managed to understand what director Aavala wanted to convey. Not a fan, but here’s the review.

While the Spanish-language period drama ran houseful, I saw a few people walk out of the Malayalam-language drama. Both talked about human nature and tendencies, but I think maybe a film on homosexuality doesn’t interest many. The hall was more than half empty.

Note – The menace of talkative people and smartphone addicts was in full strength for all the three films, which upset me very much. Where do these people come from? And why do they claim to be film fanatics?

The third film for the day was the Hindi-language crime drama, Bhonsle. It started off very well, but I sensed that director Makhija resorted to his Ajji (2017) elements to move the narrative further while pulling some inventive stuff like a climax shot on an iPhone. The Q&A after the screening was more interesting than the film. My review here. 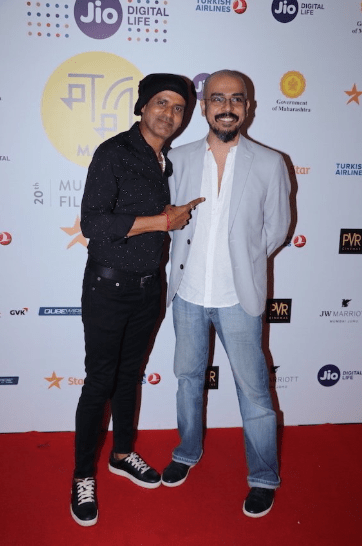 Manoj Bajpayee and Devashish Makhija at the screening of Bhonsle on day 3 of MAMI 2018. / © Urban Asian

Manoj Bajpayee and the director were hosted by Vasan Bala. It was a pleasure to see the thespian actor talk from a one-meter distance because I was sitting on the first row – life-time as well as MAMI record. The discussion was insightful, mostly because Bajpayee revealed more than he should have (I think), often making his answers anecdotal. It was not surprising to hear that it took more than 4 years to produce Bhonsle as the production got delayed due to a cash crunch.

For people who don’t know, this film is a follow-up to the 2016 short story called “Tandav” which involves the same director and actor.

It was disheartening when he later spoke about the struggle that he foresees in distributing the film theatrically in India. I remember how badly Ajji had done at the box office earlier this year, and I have the same fear for Bhonsle. Maybe we have to find a way to save these story-driven films. Maybe Netflix is the answer. I don’t know.

Kudos to the BookMyShow Ground Team

Since day 1 I have been seeing a lot of people slate and attack the on-ground staff of BookMyShow for a variety of reasons. Two of the most common are listed below.

The only thing I have to tell them is this: guys, they are just doing their job. And it has been always like this. All you can do is to line up on time (as soon as possible; I know you are racing against time) and take what comes to you. There is no point in barking at the on-ground staff. Moreover, MAMI is never going to disown BookMyShow. So, our best bet is to ignore the shortcomings and enjoy the fest.

Instead of looking at these minor issues, we must come together and congratulate them for their hard work. These people – probably hired from event management organizations – toil round the clock so that we can watch movies day in and day out. And this year, the screenings have been very punctual, you cannot deny that. And I appreciate it.

With that appreciation, I would like to close this summary of day 3. The next two days won’t be hectic for me because I plan to catch one film per day. Here’s to a better rest of the festival. TN.